Start a Wiki
Kata William Burgue is an alien who lives on the planet Galiou. He has great strength and good agility. Although, he is not one to problem solve. His weapons are mini guns, laser dagger, electric shield, and a Swolver.

Kata William Burgue was born two years after Xaiver Pardek T'laran. He was raised as a rebel on the planet Galiou. When he was 12, he was given his first weapon, a laser dagger. By 15, a minigun. and not soon after, a Swolver. When he hit 17 however, the great Electro War began. The war that the planet Galiou faces during the time of the Sci-Fi RPG II. He then later find people frozen in ice, in the death mountains of the planet Galiou.

Kata as he appears in Si fi RPG 2 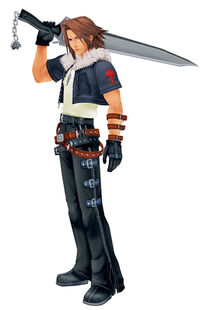 Kata's 3D model
Add a photo to this gallery
Retrieved from "https://ktcrpg.fandom.com/wiki/Kata_William_Burgue?oldid=4564"
Community content is available under CC-BY-SA unless otherwise noted.